Remember that I had written recently that the pandemic is likely to change the practice of hugging, and the Mata Amrita Index? Now the New York Times has also covered it (possibly paywalled). It includes helpful graphics on “how to hug and how not to hug”. 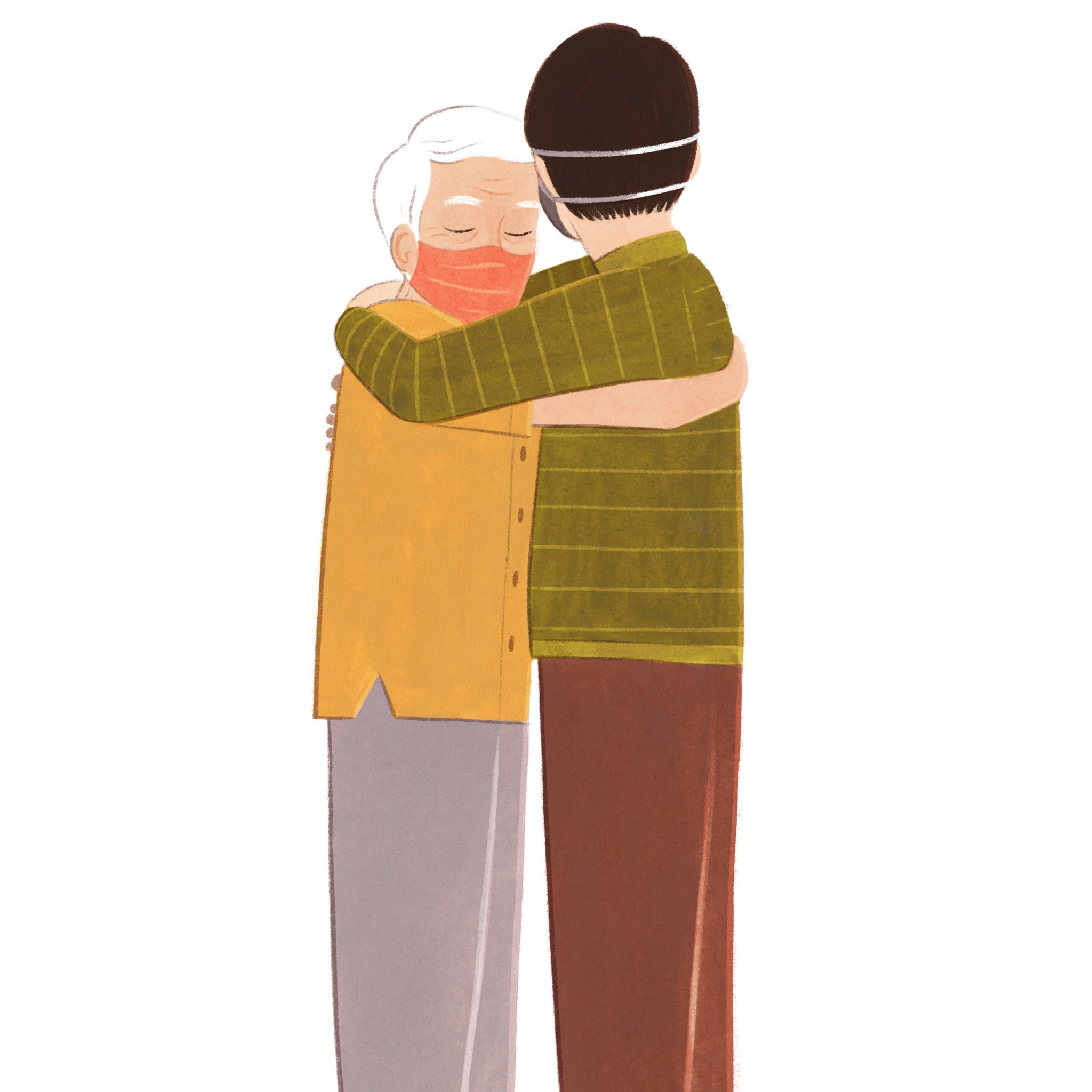 It is an interesting article, quoting an expert on aerosols about what is the best way to hug. From what I gather, the key is to keep your faces turned away from each other. As long as you maintain this, hugging should still be fine.

[…] the safest thing is to avoid hugs. But if you need a hug, take precautions. Wear a mask. Hug outdoors. Try to avoid touching the other person’s body or clothes with your face and your mask. Don’t hug someone who is coughing or has other symptoms.

And remember that some hugs are riskier than others. Point your faces in opposite directions — the position of your face matters most. Don’t talk or cough while you’re hugging. And do it quickly. Approach each other and briefly embrace. When you are done, don’t linger. Back away quickly so you don’t breathe into each other’s faces. Wash your hands afterward.

Most of this seems fine. Only the last bit seems a bit difficult to implement – how do you wash your hands soon after hugging someone without offending them? I mean – I face this problem already. There are many people I come across whose hands I shake (this is all pre-pandemic) which leave me queasy and at unease until I have washed my hands. The challenge in this situation is how to efficiently wash your hands without making it explicit that the handshake wasn’t a pleasant one.

My favourite bit in the article, however, is the last one. It pertains to the “quality of hugs” that I’ve been talking about for a while now, and also happens to bring in Marie Kondo into the picture.

Dr. Marr noted that because the risk of a quick hug with precautions is very low but not zero, people should choose their hugs wisely.

“I would hug close friends, but I would skip more casual hugs,” Dr. Marr said. “I would take the Marie Kondo approach — the hug has to spark joy.”

As anyone here who has tried to construct an index will know, any index, however well constructed, will end up being way too simplistic, and abstract away way too much information. This is especially true of indices that are constructed as weighted averages of different quantities, but even indices with more “fundamental” formulae are not immune to this effect.

Quoting from the blog post where I introduced the concept:

The Mata Amrita Index for a person is defined as the likelihood of him or her hugging the next random person he/she meets.

Actually over time I’ve come to prefer what I’d called the “bilateral MAI”, which is the probability that a given pair of people will hug each other the next time they meet. The metric has proved more useful than I had initially imagined, and has in a way helped me track how some friendships are going. So far so good.

But it has a major shortcoming – it utterly fails to capture quality. There are some people, for example, who I don’t hug every time I meet them, but on the random occasions when we do hug, it turns out to be incredibly affectionate and warm. And there are some other people, with whom my bilateral MAI tends to 1, but where the hug is more of a ritual than a genuine expression of affection. We hug every time, but the impact of the hug on how I feel is negligible.

In fact, I’d written about this a couple years back, that when the MAI becomes too high, the quality and the impact of the hug inevitably suffers. Apart from the ritualness of the hug robbing it of the warmth, a high MAI also results in lack of information flow – you know you hug as a rule, so the hug conveys no information.

So, now I want to extend the MAI (all good index builders do this – try to extend it when they realise its inadequacies) to incorporate quality as well. And like any index extension, the problem is to be able to achieve this without making the index too unwieldy. Right now, the index is a probabilistic measure, but not that hard to understand. It’s also easy to adjust your bilateral MAI with someone every time you meet.

How do you think I can suitably modify the MAI to bring in the quality aspect? One measure I can think of is “what proportion of the time when you meet do you hug, and it makes you feel real good?”. As you can see it’s already complicated, but this brings in the quality component. The ritual hug with the high MAI counterparty makes no impact on you, so your modified MAI with that person will be low.

The problem with this Modified MAI (MMAI) is that it is automatically capped by the MAI, given the “AND” condition in its definition. So a person you hug infrequently, but feel incredibly good after each such hug, will have a low MMAI with you – it’s more to do with the low frequency of hugging than the quality.

If you can think of a more elegant measure, do let me know! Whoever said building an index is a simple process!

Now, after I wrote that post I realise that the Mata Amrita Index is a rather cultural thing – some cultures are more predisposed to hugging than others. I, for example, for whatever reason, am quite queasy about hugging and won’t do so unless I know the counterparty quite well. More importantly than the queasiness, I want to avoid the awkwardness when I offer a hug which makes the other person queasy because they are not prepared for it (this happened the very first time I met the person who is now my wife,btw). For others, hugging comes much more naturally, and if such people initiate a hug to me, I’m happy to continue with the process. But with some others I’ve noticed that both of us are not sure if it’s okay to hug and it ends up in a weird handshake while it might have been a hug!

So what are the circumstances under which the bilateral MAI between a pair of people increase over time? One is the frequency of meeting. If you meet someone very regularly, you get into a particular routine on how you greet each other – be it a handshake or a hug or a namaste or a feet-touch or a cheek-peck. Since you are meeting each other regularly, both of you remember the established protocol. And both instinctively go for it. Even if you want to change protocol, the other person is so used to it that they continue. And considering that you can’t command someone to hug you (unless you are an “aunty”) you end up sticking to protocol!

If you meet each other infrequently, on the other hand, you are likely to have forgotten whatever protocol existed, and so there is a higher probability of changing protocol, and so there is a chance that you can enhance your Mata Amrita Index. It helps if it’s been so long since you last met that either of you has undergone a culture-changing experience (like moving to a new country, or a new job, or a new school, for example), which can change the way you greet and can use as an excuse if the counterparty objects to your way of greeting.

Then, if you are meeting after a long time and for some reason you have got closer in the interval (in terms of things you’ve spoken about with each other since the last time you met, for example), it is again okay to explore an enhancement of the Mata Amrita Index the next time you meet.

There is also the company you keep. Let’s say A, B and C are meeting. Whether it’s due to their past bilateral MAI, or individual MAI, A and B hug, and then B and C hug. Now it becomes socially awkward for A and C not to hug, so they end up hugging each other, and enhancing their MAI. The next time they meet, this enhancement will be in their mind, and can lead to further enhancement in MAI. This can also work the other way – if you are in a large group and only two of you in that group have a high bilateral MAI, then it becomes awkward for you to hug when everyone else is being all prude and shaking hands. That can decrease MAI.

There is another way the company you keep can end up decreasing MAI. Again, if A,B and C meet, and A-B have a high bilateral MAI. Let’s say that A is meeting C for the first time. Before A hugs B, she evaluates is she is also okay hugging C (since not doing so might be awkward), and that might lead A to not hug B!

This is complicated business! Do you know any way in which the Mata Amrita Index can be enhanced? Or diminished? Do write in!