I don’t know the answer to that question. However, I have a theory on how handwriting passes on down the generations.

So my daughter goes to a montessori. There they don’t teach them to read and write at a very early age (I could read by the time I was 2.5, but she learnt to read only recently, when she was nearing 4). And there is a structured process to recognising letters (or “sounds” as they call them) and to be able to draw them.

There are these sandpaper letters that the school has, and children are encouraged to “trace” them, using two fingers, so they know how the letters “flow”. And then this tracing helps first in identifying the sounds, and later writing them. 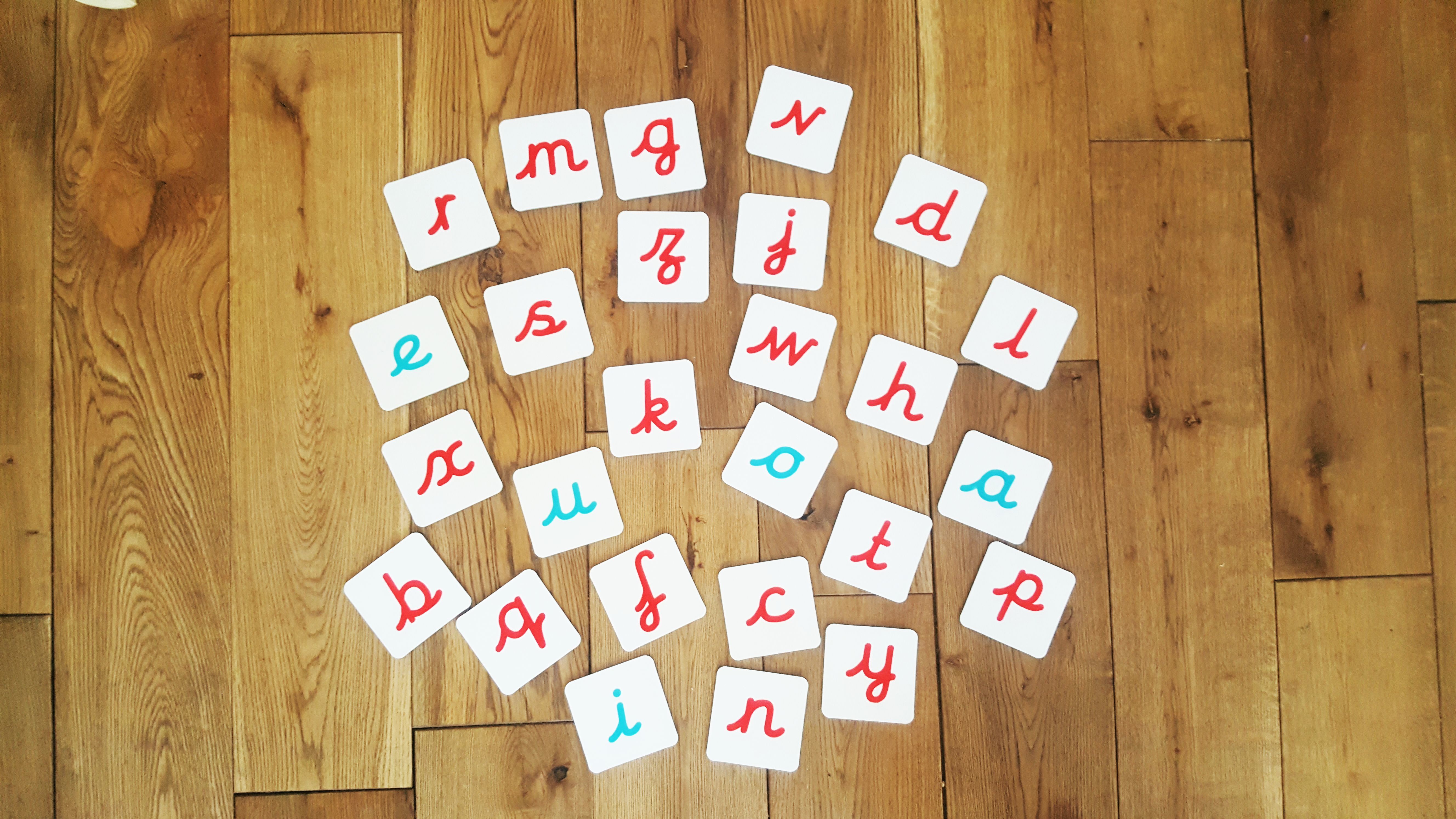 With school having been washed out pretty much all of this year, we have been starved of these resources. Instead, over a 2 hour Zoom call one Saturday in July, the teachers helped parents make “sound cards” by writing using a marker on handmade paper (another feature of Montessori is the introduction of cursive sounds at a young age. Children learn to write cursive before they learn to write print, if at all).

So when Berry has to learn how a particular sound is to be written, it is these cards that I have written that she has to turn to (she knows that different fonts exist in terms of reading, but that she should write in cursive when writing). She essentially traces the sounds that I have written with two fingers.

And then in the next step, I write the sounds on a slate (apparently it’s important to do this before graduating to pencil), and then she uses a different coloured chalk and traces over them. Once again she effectively traces my handwriting. Then earlier this week, during a “parent and child zoom class” organised by her school, she wanted to write a word and wasn’t able to write the full word in cursive and asked for my help. I held her hand and made her write it. My handwriting again!

Now that I realise why she seems to be getting influenced by my handwriting, I should maybe hand over full responsibility of teaching writing to the wife, whose handwriting is far superior to mine.

The trigger for this post was my opening of a notebook in which I had made notes during a meeting earlier this week (I usually use the notes app on the computer but had made an exception). Two things struck me before I started reading my notes – that my handwriting is similar to my father’s, and my handwriting is horrible (easily much worse than my father’s). And then I was reminded of earlier this week when I held my daughter’s hand and made her write.

This is how handwriting runs in the family.

This is my first ever handwritten post. Wrote this using a Natraj 621 pencil in a notebook while involved in an otherwise painful activity for which I thankfully didn’t have to pay much attention to. I’m now typing it out verbatim from what I’d written. There might be inaccuracies because I have a lousy handwriting. I begin

People like models. People like models because it gives them a feeling of being in control. When you observe a completely random phenomenon, financial or otherwise, it causes a feeling of unease. You feel uncomfortable that there is something that is beyond the realm of your understanding, which is inherently uncontrollable. And so, in order to get a better handle of what is happening, you resort to a model.

The basic feature of models is that they need not be exact. They need not be precise. They are basically a broad representation of what is actually happening, in a form that is easily understood. As I explained above, the objective is to describe and understand something that we weren’t able to fundamentally comprehend.

All this is okay but the problem starts when we ignore the assumptions that were made while building the model, and instead treat the model as completely representative of the phenomenon it is supposed to represent. While this may allow us to build on these models using easily tractable and precise mathematics, what this leads to is that a lot of the information that went into the initial formulation is lost.

Mathematicians are known for their affinity towards precision and rigour. They like to have things precisely defined, and measurable. You are likely to find them going into a tizzy when faced with something “grey”, or something not precisely measurable. Faced with a problem, the first thing the mathematician will want to do is to define it precisely, and eliminate as much of the greyness as possible. What they ideally like is a model.

From the point of view of the mathematician, with his fondness for precision, it makes complete sense to assume that the model is precise and complete. This allows them to bringing all their beautiful math without dealing with ugly “greyness”. Actual phenomena are now irrelevant.The model reigns supreme.

Now you can imagine what happens when you put a bunch of mathematically minded people on this kind of a problem. And maybe even create an organization full of them. I guess it is not hard to guess what happens here – with a bunch of similar thinking people, their thinking becomes the orthodoxy. Their thinking becomes fact. Models reign supreme. The actual phenomenon becomes a four-letter word. And this kind of thinking gets propagated.

Soon the people fail to  see beyond the models. They refuse to accept that the phenomenon cannot obey their models. The model, they think, should drive the phenomenon, rather than the other way around. The tails wagging the dog, basically.

I think there is a lot more that can be explained due to this love for models and ignorance of phenomena. I’ll leave them as an exercise to the reader.

Apart from commenting about the content of this post, I also want your feedback on how I write when I write with pencil-on-paper, rather than on a computer.